Akupara Beer – The Hidden Meaning Of The Palm Spring Beer

Palm Springs is a 2020 fantasy, rom-com and mystery movie made for the American streaming service Hulu. It was created by director Max Barbakow and screenwriter Andy Siara. The film follows main characters Nyles and Sarah who are portrayed by Andy Samberg and Cristin Milioti respectively at a mutual friend’s wedding in Palm Springs. However, after a violent end to their night, these two find themselves trapped in an infinite time loop. One that revolves around the day of the aforementioned wedding.

Now, this film is filled with hidden details and has a few big names. Some of the stars featured include the aforementioned Andy Samberg and JK Simmons. Despite that though, one of the biggest topics of discussion around the film is the beer Nyles and Sarah drink throughout called Akupara. Naturally then, this leads people to wonder what the deal is with this beer.

Is Akupara Beer A Real Beer?

Like many a film and television series that has come before it, Palm Springs has its own beer. This is in the form of the brand Akupara that is regularly seen throughout the film. Unfortunately for beer enthusiasts though, this like Death In Paradise’s Etensel beer is a work of fiction created for the film itself. As such, it is not available for the general public to purchase.

That said though, in the run-up to awards seasons, it is a common practice for major movie studios to send critics and award voting bodies review copies for various films. In addition to receiving a copy or exclusive link to the film though, these studios may send some extra goodies.

For Palms Springs though, this is also the case as many prominent critics received a four-pack of Akupara beer. This resulted in some images surfacing online of said critics sipping on said beers. As such, Akupara beer has albeit in limited quantity been able to reach the other side of the fourth wall.

Additionally, like how is labelled on the real-life limited edition Akupara beer there is a Mexican bar and craft brewer called Akupara. However, there is no evidence to suggest that they have ever used the label shown on the Palm Springs version of the beer. As such, this is more than likely a simple coincidence meaning the Palm Springs Akupara remains a fictional beer. 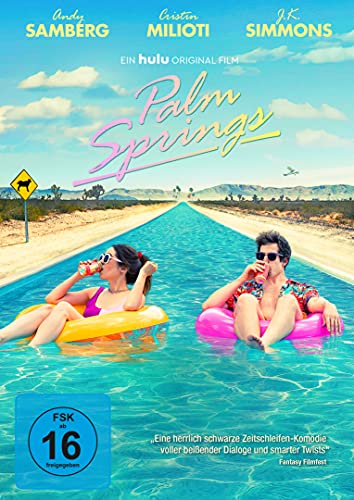 The Hidden Meaning Behind Akupara Beer?

When a film is made well and something is shown prominently throughout such as with the fictional Akupara beer, there is often a hidden meaning behind such an inclusion. Of course, this is also true herewith writer Andy Siara and director Max Barbakow; as they intentionally called the beer Akupara as an allusion to Hindu Mythology. That said though, the design of the beer can itself is credited by Barbakow to production designer Jason Kisvarday.

In Sanskrit, Akupara translates to “unlimited, unbound”. This is of course quite fitting to a story revolving around time loops and people being stuck repeating the same day for eternity.

Additionally, Akupara (also known quite commonly as Kurma) is also the name for the Hindu mythology version of the world turtle/tortoise. This is a concept in mythology where the world sits atop the shell of a giant turtle. Within this context, the name Akupara is described as “one who is without death” and is a reincarnation of Lord Vishnu. As such the name Akupara being used for the beer once again somewhat reflects the situation that the characters played by Andy Samberg and Cristin Milioti have found themselves in.

Truly the above is only the tip of the iceberg though as the Akupara can design is incredibly detailed. Barbakow himself has said that “If you look close on that label, there’s a graphic that kind of explains the mythology of the world and the earthquake”. This of course is in reference to the events of the can and the film. He also added that diving deep down a Google search will lead to a “nice little wormhole, no pun intended, that explains some of the metaphysics behind the movie.”

Some Other Hidden Details Of Palm Springs

Truly though when it comes to the movie Palm Springs there are loads of hidden details and behind the scenes trivia. Some particularly interesting extra tidbits though include the following:

Akupara beer as depicted in the movie Palm Springs is entirely fictional aside from some promotional packs sent to critics. However, there is a Mexican bar and brewery called Akupara, however, this is thought to be entirely coincidental.

What beer is Andy drinking in Palm Springs?

In Palm Springs, Andy Samberg’s character Nyles drinks a type of beer called Akupara. However, this is not a real beer but in fact, one specifically invented in the script for the movie.

What does he drink in Palm Springs?

The main character of Palm Springs, Nyles drinks a brand of beer called Akupara. However, this beer was specifically invented in the script for the movie and as such is not a real beer but a fictional one.