Coors beer is a beer brand that in the present day is enjoyed greatly by a wide variety of people around the globe. Some popular varieties include Coors Light and Coors Banquet Beer. However, this hasn’t always been the case since Coors beer. In fact, the company most known for its very light beer used to only do business on the west coast of America. This is because it used to be illegal to sell east of Texas and the Mississippi River. With this in mind though, you may be wondering why was Coors beer illegal east of Texas? Additionally, how did Coors beer bootlegging rise as a result? If so, then we’ll explain everything about this unique part of American beer history below.

Coors has something of a reputation for historically being illegal in various parts of America. In particular, this is often as a result of the film “Smokey And The Bandit” which starred Burt Reynolds and Sally Field. This being because transporting Coors beer/bootlegging is a major plot point in the film. However, we all know that films make things up all the time. As such, you may be wondering if Coors was ever actually illegal.

Coors was created by German immigrant Adolph Coors in the late nineteenth century. Then by the mid-twentieth century, Coors had become a favourite of many a big beer fan east of Texas. However, it never ended up crossing states to east of Texas. As such, this Coors exclusivity prompted smugglers to begin smuggling this popular beer across state lines into certain states where it was unavailable. Of course the reason for this being that within these states, Coors was very much a sought after product.

Strictly speaking, you couldn’t call Coors illegal in a historical sense. However, the company did not pursue distribution east of Texas, or indeed national distribution at this point in time. As such, whilst it wasn’t strictly speaking illegal to possess and drink Coors. However, it was not legal to sell it or distribute it within these regions.

Why Could Coors Beer Not Be Sold East Of Texas?

As mentioned above, Coors beer was not distributed east of Texas. The reason for this is because these states did issue alcohol permits and indeed Coors did not pursue them. This is due to the fact that prior to the 1970s Coors was an unpasteurized beer.

Whether a beer is pasteurized or unpasteurized can make a great difference to the shelf life or a beer. Pasteurization being a process of heating up the beer in order to eliminate the microorganisms found within unpasteurized. The result of this is that the the shelf life will often become comparable to something like milk.

As a result of this, these unpasteurized beers like Coors used to be requires constant re-frigeration. This being because it will otherwise quickly spoil. As such, Coors beer before the late seventies was incredibly difficult transport. As such, it was near enough impossible to do so over long distances. The result of which being that Coors initially only sort to distribute their beer to locations within shorter distances.

Another reason for this is though is that certain states will have different alcohol regulations. This being especially true when it comes to unpastuerized verses pasteurized beer. One such example being Oregon which had a statute which had been in place for half a century related to unpasteurized beer. This being that this variant of beer was considered unhealthy and as such could not be packaged and sold in stores. That said though, this doesn’t mean that it was illegal to possess Coors in Oregon. However, to package the unpastuerized Coors and sell it in a store would be illegal. 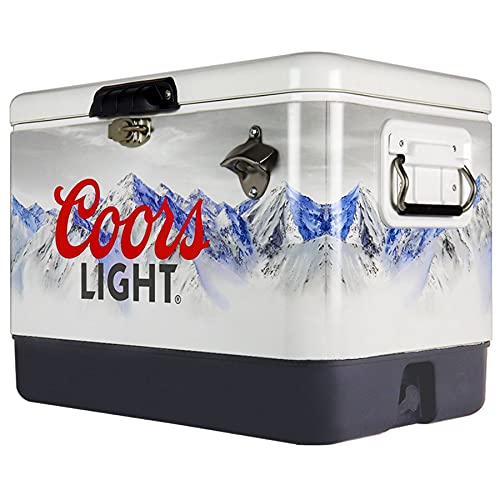 Where Does The Belief Come From That Coors Was Illegal?

As mentioned above, Coors beer wasn’t exactly something that was illegal in the states eastwards of Texas. That said though, they were often distributed within these areas due to a combination factors. These being that differing state regulations and the extreme difficulty in transporting the unpastuerized Coors beer.

Of course, these will naturally be contributing factors to the belief that Coors used to be illegal. However, there are a variety of other reasons which will contribute to how this idea came to pass. One major reason for which, as mentioned prior, is the film “Smokey And The Bandit”.

The reason for this is that the film’s plot revolves around a pair of truck drivers that are tasked with smuggling a truckload of Coors beer from Texas to Georgia by a rich business man. Along the way, they also pick a runaway bride and are pursued by her fiance and a sheriff. As a result of this, the connotation between Coors beer and the outlaw lifestyle can be partially credited to the plot of this film.

Answered: Why Was Coors Beer Illegal East Of Texas?

Coors beer is perhaps one of the most popular beers in both America and indeed many countries around the world. However, as discussed above, it has a reputation of a beer that used to be illegal east of Texas. However, this is actually somethign of a misconception, although there are variety of reasons that this is the case.

Some of these factors include, Coors themselves not pursuing distribution in the states east of Texas. One reason for this being that these different states will often have different regulations surrounding unpasteurized beer. This being the type of beer that Coors delt in before the seventies. Another factor that goes hand in hand with this though is the fact that this type of beer needs to be under near constant refrigeration. As such, it was incredibly hard to transport this type of beer over long distance.

Meanwhile, the scarcity of Coors within certain states, along with the film “Smokey And The Bandit” have also contributed to this reputation. Additionally, transporting it across state lines in large quantities would also be illegal, as it would be with any type of alcohol.

Ultimatley, this misconception is one that is quite popular and somewhat adds to the appeal of this particular beer. As such, this reputation of Coors beer is likely one that will endure long into the future.

FAQ – Why Was Coors Beer Illegal East Of Texas

Why was Coors beer illegal in the East?

Coors wasn’t illegal in the east strictly speaking. It was merely not distributed in these regions due to the impracticalities of transporting unpastuerized beer. That said though, in some states such as Oregon, it used to be illegal to package and sell unpastuerized beer in stores. However, merely possessing the beer itself wasn’t illegal.

Why was Coors beer illegal to buy in most states?

Coors beer was illegal to buy in states east of Texas due to it often not being officially distributed in these regions due to the impracticalities of transporting unpastuerized beer. Additionally, in certain states unpastuerized beers like Coors used to be used to be illegal to package and sell in stores. That said though, merely possessing this beer without intent to sell would not be illegal.

When did Coors come east?

Coors wasn’t always a beer that was available nationally across the United States Of America. In fact, it was not easily available east of Texas for many years. This being due to the issues around transporting and selling unpastuerized beer. Soon after Coors began pastuerizing their beer though it began becoming more readily available, with it coming eastwards around 1981.